2020 Green Lake Concerts In the Park 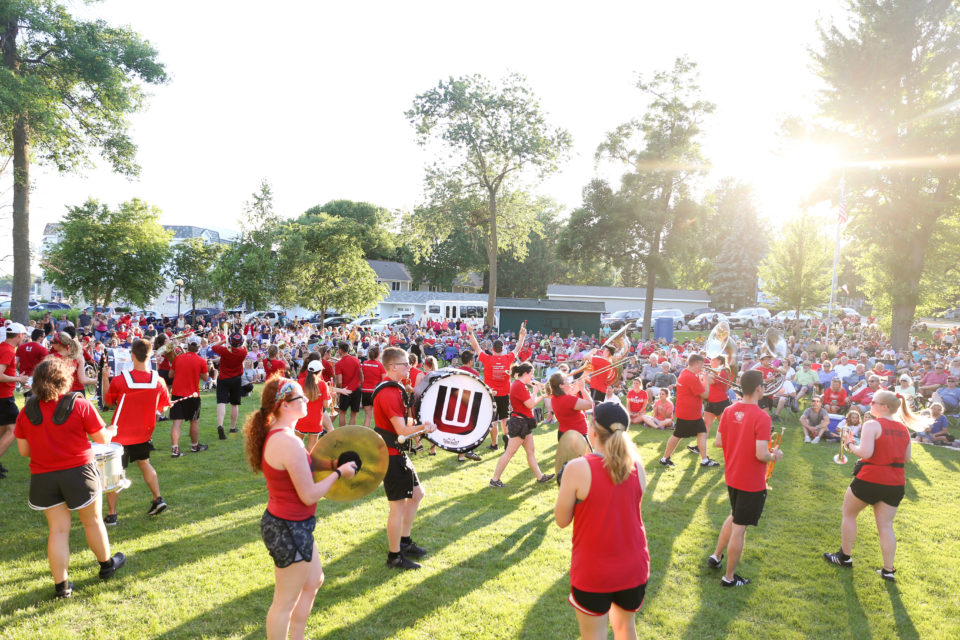 There’s nothing better than being able to hang out at Deacon Mills Park in the warmth of summertime for the 2020 Green Lake Concerts in the Park Series!  Listening to live music, being by the lake, and enjoying a snack or refreshment – doesn’t sound like there’s a better way to spend a Wednesday night!

Starting July 9th, and continuing for seven more Wednesdays is our Concerts in the Park series!  Concerts will run from 6:30PM-8:30PM. So make sure to bring your friends and family to enjoy some great live music together.

Wondering who is coming to the 2020 Green Lake Concerts in the Park Series?  Check out the lineup below!

7/8 Andrea & The Mods  (Rock) Three-piece band featuring bass, guitars, and three-part harmony vocals. Playing a mix of rock, pop, good country listening, dancing, or just plain singing along music! Have been playing for many many ears in and around Milwaukee and surrounding areas, with a large dedicated fan base. PRESENTED BY FORTIFI BANK

7/15 Richochettes (60’s Rock) With tight vocal harmonies and authentic instrumental sounds, the Ricochettes perform music that all ages can enjoy. The Ricochettes play music by: The Beatles, The Hollies, Herman’s Hermits, The Searchers, Dave Clark 5, and more. Take the time machine ride to the 1960’s with The Ricochettes and enjoy good music and a great time. PRESENTED BY SPECIAL PROPERTIES

7/29 Mecan River Ramblers (Bluegrass) The Mecan River Ramblers are a Wisconsin based bluegrass band comprised of area musicians who share a common devotion to bluegrass and acoustic music. The Ramblers weave contemporary and traditional bluegrass music along with a myriad of other musical influences into a truly entertaining mix. No matter what the style, the Ramblers’ knack for connecting with an audience makes every performance a guaranteed great time. As their loyal following will tell you, “This band is fun!!” PRESENTED BY KINAS EXCAVATING

8/12 The Del Rays The “DEL RAY’S” are a four-piece band that has been performing together since the late 1970’s. The “DEL RAY’S” perform a variety of rock & roll from the 50’s, 60’s, and the 70’s.  The “DEL RAY’S” have a knack for getting the crowd involved and keeping them dancing all night long.  PRESENTED BY HORICON BANK

8/19 Remington’s Ride (Vintage Western Swing & Roots Country) Remington’s Ride is dedicated to bringing the great sounds of Vintage Western Swing and Roots Country to a whole new generation of music fans looking for something unique and exciting. A Remington’s Ride show takes you through western music genres from the 1930’s through the 1970’s, with tight vocals and dazzling instrumentals, showcasing the likes of Bob Wills and His Texas Playboys to Buck Owens and His Buckaroos, Johnny Cash, the Hag, and even Commander Cody and His Lost Planet Airmen. PRESENTED BY FORTIFI BANK

*dates subject to change, please check back often for updates*
If you want to find more happenings around Green Lake, head to our festivals page. It is filled with all the best events to attend in and around the area. To follow up on more current events and updates, make sure to follow our Facebook Page too.
Events
©2022 Green Lake Area Chamber of Commerce. All Rights Reserved.
Digital Marketing by Regal